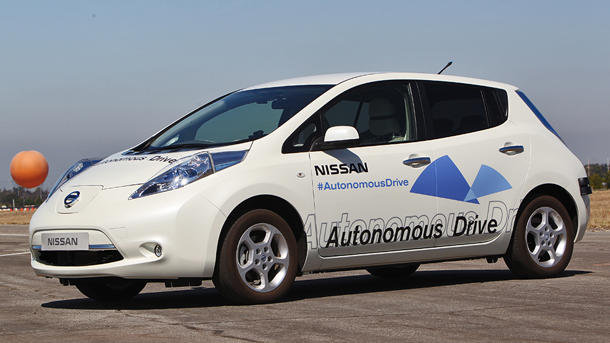 The question is: If Nissan's ready to sell a self-driving car, who will be ready to buy one?
After Google's initial pioneering in self-driving experiments, many automakers have quickly caught up with the idea and technology of using radars, GPS tracking and complicated software to guide a vehicle without input from the driver. In a few modern luxury sedans — namely the Lincoln MKZ, Mercedes S-Class and Infiniti Q50 — the combination of several available safety features adds up to an ersatz form of self-driving for at least brief stretches.
But no automaker before Nissan's move today has committed to building a fully autonomous car, less for reasons of technological uncertainty than practical ones. Autonomous cars are in theory supposed to reduce crashes due to human error, and with $160 billion in damages and nearly 40,000 deaths a year in the United States alone due to traffic accidents, the payoff for even small reductions in accidents could be huge. Google's experimental division is so enamored by the prospect — and a potential market of billions of dollars a year — that it's considered trying to build its own cars, tech writer Amir Efrati reported earlier this week.
Nissan says it will develop a special test track in Japan by the end of 2014 to test its suite of software, laser and radar scanners, cameras and other technology that will go into what it calls Autonomous Drive, along with research assistance from 23 universities in the United States and Japan. Part of that testing will involve how Nissan would equip a car with everything it needs on-board to navigate in traffic; unlike the Google experiments, Nissan says its cars will not rely on external data links. And by 2020, Nissan expects the whole package to be offered at "realistic prices," with the suite eventually available on all its models.
That's a significantly faster timeline than many government officials and safety experts anticipated, in part because so many questions about how self-driving cars would work and whether they would actually improve safety as advertised have yet to be answered. The tests underway today often lead to more questions; a recent experiment with unmanned vehicles driving at slow speeds around European cities discovered that children would run in front of the autonomous vehicles just to get them to stop. While a few states allow tests of self-driving cars on their roads, none has tackled how much liability the software maker has for any crash, and several experts have noted that encouraging drivers to take their attention away from the road would make it more difficult for them to intervene in an emergency.
(And no one's answered one key hypothetical question: Could a self-driving car handle a drunk would-be driver, the type that causes more than 10,000 U.S. traffic fatalities every year?)
Among the automakers wrestling with these issues is Tesla Motors. Chairman and co-founder Elon Musk told Yahoo! last week that his company was pursuing what he called "autopilot" systems for future Teslas, but that a fully autonomous car still faced many hurdles.
"Solving the last few percent of issues with an autopilot is exponentially difficult," Musk said. "Getting from 90 percent solved to 99 percent is way harder than going from 0 to 90...The advantage humans have is they can come up with a decision when things aren't right, when the stop sign's down or the traffic light is out."
Nissan's Ghosn says the self-driving car pledge reflects his company's "willingness to question conventional thinking and to drive progress." Five years ago, Ghosn made a similar pledge when building the Nissan Leaf, the first true mass-market electric car – which, while becoming the best-selling EV in the world, has never reached the sales goals once laid out by Ghosn. In the auto industry, just because you're ready to build new technology doesn't mean the public's ready to buy it.
Back